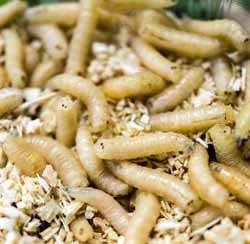 OF FLESH AND FLIES

World’s population is constantly growing. According to the Food and Agriculture Organisation (FAO) of the United Nations, global consumption of fish and meat will increase by about 70 percent until 2050. As resources are running short, research has been looking already for a long time for new sources of protein. The best-known meanwhile is soya, the latest is the high-quality protein from fly larvae.

Larvae of “Hermetia illucens” – also known as black soldier fly – are particularly rich in proteins. Great benefit of fly protein: Big quantities of protein can be produced on smallest space and the protein content is multiples higher than from other sources.